The Chemical Hazards Research Center (CHRC) was established in 1993 to study the potential consequences of toxic or flammable material released to the atmosphere. During its existence, the CHRC has conducted research programs for several sponsoring organizations. 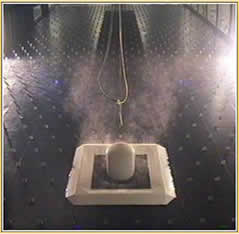 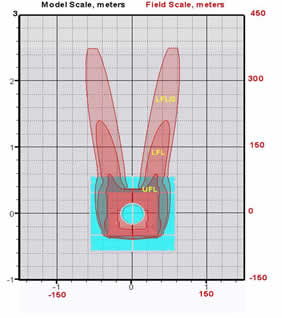 Computer models have been developed at the CHRC for assessing the consequences of hazardous material releases. DEGADIS* was developed to model the dispersion of denser-than-air contaminants (gases or aerosol) from area sources or vertical jets (or plumes) over flat, unobstructed terrain. To consider issues involving terrain or flow obstructions (such as tanks or other structures), computational fluid dynamics (CFD) tools (such as FEM3A** have been used in conjunction with turbulence models accounting for the effects of density stratification on dispersion.

Because physical and computer models have inherent strengths and weaknesses, the combination of expertise in these areas has been very beneficial to the understanding of stably stratified dispersion processes. In particular, direct validation of computer modeling techniques at wind tunnel scale has significantly improved the resulting computer codes for the purpose of predicting the dispersion of toxic and flammable contaminants in the atmosphere. 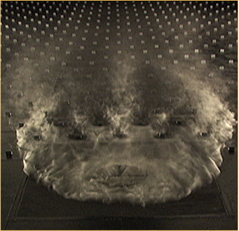 *Developed for the U.S. Coast Guard and the Gas Research Institute, DEGADIS models the atmospheric dispersion of ground-level, area-source, denser-than-air gas (or aerosol) contaminants released with negligible (initial) momentum into an atmospheric boundary layer over flat, unobstructed terrain (as from a boiling liquid pool). DEGADIS models the dispersion processes associated with gravity-driven flow, contaminant entrainment into the atmospheric boundary layer, and subsequent downwind travel from the release as a stably stratified plume or cloud. The model was verified by comparison with a wide range of laboratory and field-scale, denser-than-air contaminant release/dispersion data. In work sponsored by the U.S. Environmental Protection Agency, DEGADIS was modified to also model a vertical jet/plume with elliptical cross-section and air entrainment consistent with Pasquill-Gifford plume dispersion coefficient representation of atmospheric turbulent entrainment. The jet/plume model is applicable to scenarios where the plume remains aloft or when the plume centerline returns to ground-level with subsequent dispersion modeled as a ground-level area source. The computer code and model documentation are available on the EPA Support Center for Regulatory Atmospheric Modeling.

**FEM3A is a finite element based 3-D CFD code. It was originally developed at Lawrence Livermore National Laboratory (LLNL) by Stevens T Chan and Donald L Ermak, during the 1980s and early 1990s, specifically for modeling dense gas dispersion in the atmospheric boundary layer. Further development and application of the model has been undertaken at the CHRC, under contract to the Gas Technology Institute (GTI) specifically for the modeling of LNG vapor dispersion. Turbulence closure models and other sub-models were specifically developed to model the important features of dispersion of an LNG vapor cloud in the atmosphere.